Home is strange. It is carried with us rather than left in one place, and for better or worse, it affects the very core of our being. We can get lonely without it. We can feel liberated when we leave it behind. Such a concept, full of contradictions, is a mirror of what it is to be human.
​
We traveled halfway across the world to settle into a new home, only to have the rug swiftly pulled from underneath us. Such an abrupt ending left us neither here nor there, but rather, in a liminal space. It was the collecting and reflecting of these ideas that led this particular group to create these objects. We came to symbolize these transitions as a set of gateways. Doors, windows, divisions between one space and the next. A pair, one of the life we had left before and were forced to return to, and another where we had just been. Both reflecting gates to the transitive space we had in our hearts.

A move is never perfect. In the act of making paper, individual fibers mesh together to make an interwoven sheet bound together by a particular time and place. The individuals who came together in Cortona this spring meshed together to create such a bond, but that bond was broken before its time, like the jagged edges of torn paper. With this project, we hope that you can sense some of the community that we shared and the homes we’ve cherished. Thank you, to here, to there, to us, and to all of you.

The twelve ceramics students and one professor who met on the Spring 2020 Cortona Italy Studies Abroad program, hailed from different schools in different parts of the country, but brought the diverse places in their lives together through participation in this project—a sort of final hurrah. Each student made two drawings, one of an entranceway from their home or safe space in the United States, and one from their brief home in Italy. Jeni, the professor, who remained in Italy contributed her Cortona doorway. The resulting number of plates, twenty-five, is significant because it equals the number of hours that elapsed between the time the group was notified of evacuation to the time they left the Comune. The plates were made in Cortona by Jeni using an Italian earthenware clay body, and each measures 21 by 12 centimeters. They were covered in a green slip and each drawing was reproduced on the surface using an image transfer process and then covered with a translucent honey glaze.

In honor of the community we shared, there are also four collaborative plates, each coalesced by four students using images of items from (or reminiscent of) the homes of each of the thirteen collaborators. These plates are a collection of links that were brought together to give a physical form to our interpretation of “home” during a time in which we were homebound. These plates were made in addition to the set of twenty-five, and were crafted using the same process. 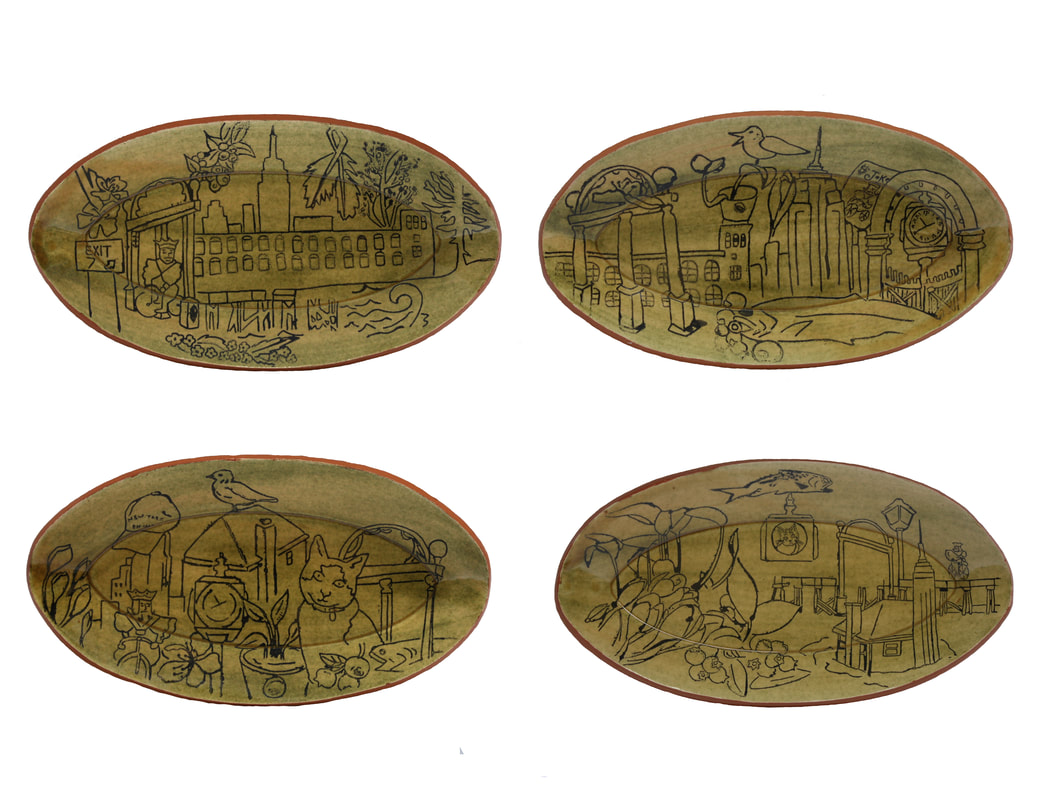